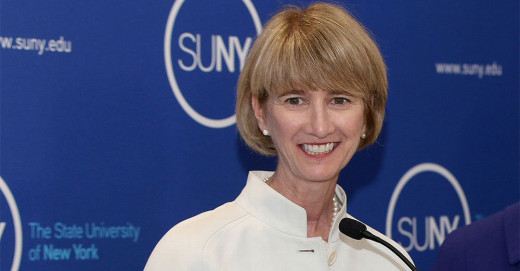 Dr. Kristina M. Johnson joined The State University of New York as its 13th chancellor in September 2017. Immediately prior to joining SUNY, Dr. Johnson was co-founder and CEO of Cube Hydro Partners, LLC, a clean-energy infrastructure company focused on building and operating hydropower plants in North America. Dr. Johnson grew the company from one plant to 19 plants on 10 rivers in five eastern states—enough to power 150,000 homes with clean energy. Prior to Cube Hydro, Dr. Johnson served as Under Secretary of Energy at the U.S. Department of Energy. As Under Secretary, she was responsible for unifying and managing a broad $10.5 billion energy and environment portfolio, including an additional $37 billion in energy and environment investments from the American Recovery and Reinvestment Act (ARRA) of 2009.

Recognized for her work in technology transfer and entrepreneurship by the states of Colorado and North Carolina, Dr. Johnson received the 2010 Milton Steward Award from the Small Business Technology Council (SBTC) and co-founded ColorLink, Inc., which was sold to RealD, and is responsible for 3D effects in movies such as Avatar, Gravity, and hundreds of other films.

Dr. Johnson received her B.S. with distinction, M.S. and Ph.D. in electrical engineering from Stanford University. After a NATO post-doctoral fellowship at Trinity College in Dublin, Ireland, she joined the University of Colorado-Boulder’s faculty in 1985 as an assistant professor and, later, full professor. In 1987, Dr. Johnson co-founded the National Science Foundation’s Engineering Research Center (NSF/ERC) for Optoelectronics Computing Systems Center at the University of Colorado and Colorado State University, and went on to serve as its director from 1994 to 1998.